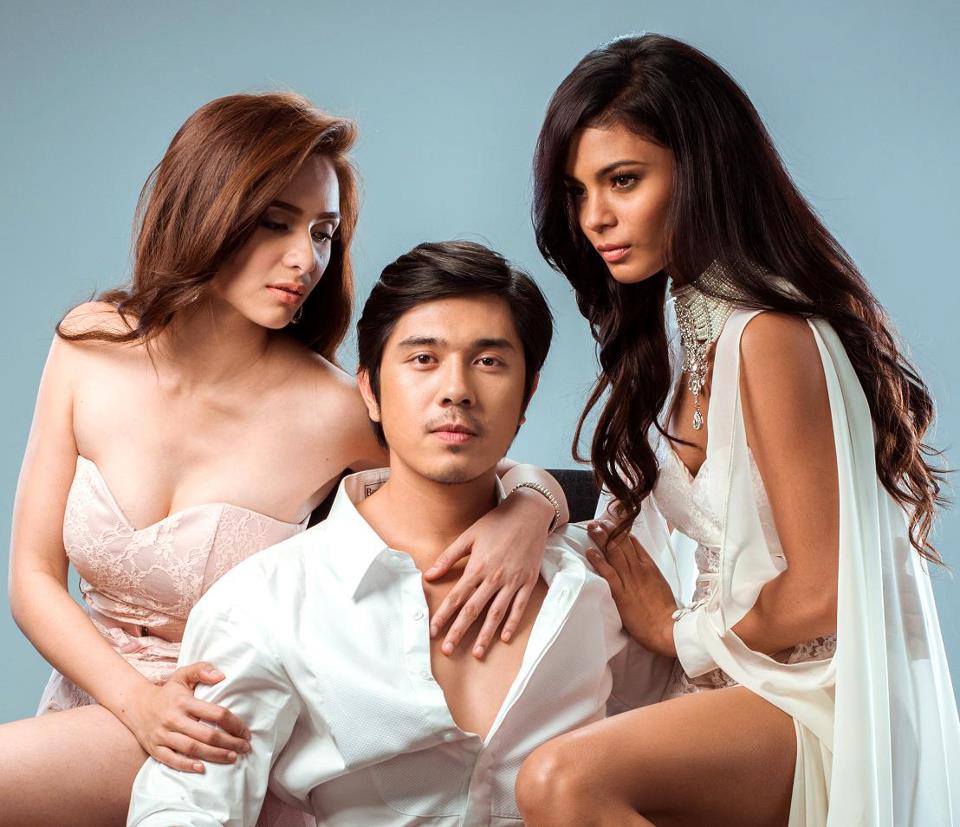 For the very first time, Kapuso leading ladies Jennylyn Mercado and Lovi Poe will do an acting showdown in the big screen via ‘The Bride and the Lover’, an upcoming sexy/dramedy of Regal Films set to be shown this coming March. Joining the two ladies is Kapamilya hunk actor Paulo Avelino.

Here’s the synopsis of ‘The Bride and the Lover‘ taken from the official FB page of the movie:

Vivian Paredes, real estate magnate, the only daughter and CEO of the Paredes Group of Companies is about to wed Nathan Albino, one of the most eligible bachelors in the country.

All a-glow in her magnificent wedding gown, Vivian’s composure though intact and solidly calm, belied a hint of a storm. Her maid of honor and best friend, Sheila Montes, head and editor-in-chief of the top lifestyle magazine “Z,” is up to her neck with all the wedding preparations under her care.

But just at that high moment of this fabulous wedding, Vivian drops a bomb that shocks everyone. She exposes the secret affair between her groom Nathan and her best friend maid-of-honor Sheila happening right under her nose. The scandal rocks the elite world! She throws her bouquet at Sheila and slaps Nathan and kicks his shin with her pointed white heels before walking out. The humiliation is far more painful.

They all hide from the crowd thereafter. Vivian flies to Barcelona, Sheila to Hong Kong and Nathan to Boracay where he falls into a terrible accident rendering him hospitalized.

Weeks later, Sheila comes home. Strong-willed that she is, she is determined to move on. But news of Nathan’s accident softens her. She realizes she still has feelings for him. Unable to resist, she visits Nathan and an uneasy but intimate relationship is revived.

Meanwhile, Vivian comes home, fully transformed! From leading a rather unadventurous and conventional lifestyle, Vivian returns sultry and vampish. She goes ahead and resides in her planned matrimonial mansion despite remaining single. She decorates the house according to plan. Half-denying the pain of her loss, she resolves to take in men she can control and dispense with. Her life takes the wild side. Her leadership approach in business becomes competitive and shrewd. She launches a magnificent real-estate project. And, in a bewildering twist, she extends a reconciliatory hand to Sheila!

Sheila, still filled with compunction is dumbfounded by Vivian’s strange friendly gesture. She however accepts Vivian’s offer of hiring her magazine company to come up with a campaign for her real estate Project Vermillion Valley.

Sheila confides with her gay friend, Mike, who is wary about the rekindling of this friendship. She likewise keeps this from Nathan. However, Nathan himself reconciles with Vivian separately and without Sheila’s knowledge. And in a night of enamored reminscence, they reignite their interrupted romance.

Complications run high when Mike, Sheila’s gay friend accidentally discovers the now reversed dalliance between Vivian and Nathan. He immediately reports this to Sheila, who suddenly realizes the true motive of Vivian’s reconciliation moves. From apologetic companion, she turns into a shrewd rival. Sheila counts on an earlier amorous commitment from Nathan and announces, in front of Vivian and the rest of the media, their impending marriage. Much to the astonishment of Nathan himself!

At the climax of our story, the parties are reversed. The former bride becomes the lover and the once secret lover has become a bride. The final wedding scene becomes the setting of the Bride and the Lover’s final showdown.

One Reply to “The Bride and the Lover Cast and Synopsis”