“THE ONE THAT GOT AWAY” is the newest feel-good primetime series of GMA-7. It is refreshing to see drama actors Dennis Trillo, Rhian Ramos, Max Collins and Lovi Poe in a light romantic project.

Brillante Ma. Mendoza’s newest film Sinapupunan (Thy Womb) is set to have its World Premiere in the upcoming Venice International Film Festivals. It serves as a comeback film for the one and only Superstar of Philippine movies, Ms. Nora Aunor. Joining her in this film are Bembol Roco, Mercedes Cabral and of course, Lovi Poe. 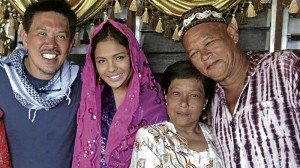 Lovi Poe feels lucky to be able to work with the one and only superstar Nora Aunor for the upcoming independent movie called ‘Thy Womb’. She is joined by award-winning actors Bembol Roco and Mercedes Cabral under the direction of Brillante Mendoza.

Here’s an article posted in The Philippine Inquirer about Lovi’s experience in Tawi-Tawi, where she also got the opportunity to meet the badjao tribe.

NOVEMBER 2 is the National ASWANG Day! It’s about time to give yourself a good scare in the cinemas!

ASWANG is the updated version of the 1992 horror classic of the same title with Alma Moreno playing the lead role under the direction of Peque Gallaga and Lore Reyes. This time, Lovi Poe plays the lead role as Hasmin and Paulo Avelino joins her as an assasin who will eventually be her love interest.

Under the direction of renowned director Jerrold Tarog, it is already predicted that this film will please both the critics and moviegoers. If you’re not yet convinced to give this film a try, watch this video featuring some behind the scenes clips and interviews with the important cast members and crew. Watch Watch Watch!

Under the direction of Jerrold Tarog, the stars of the movie include Paolo Avelino, Jillian Ward, Joem Bascon, Nina Jose, Bembol Roco, Albie Casino, Mark Abaya, Precious Lara Quigaman and Lovi Poe. The movie will be shown this coming November 2.