Lovi Poe is an amazing Filipino actress, model, and recording artist who won multiple awards in her profession. Her career would not come as a surprise as she is the daughter of the late action star Fernando Poe Jr. and the former actress and beauty queen Rowena Moran.

We picked and ranked five Lovi Poe films for easier viewing pleasure. Here are the films she has a starring role and a co-starred in.

We are starting the list with this 2013 romantic drama film written, directed, edited, and scored by Jerrold Tarog. This film for hopeless romantics is about Andrea Gonzaga (Lovi Poe) who tries to stall her wedding day upon meeting her wedding photographer, Dennis Cesario (Paulo Avelino), the brother and reminder of the man she loved but lost to fate. She and Dennis share her bittersweet memories of his brother and her fears of spending the rest of her life wedded to Robert Naval on the rooftop of the hotel. Robert finds her later to start the wedding. The ceremony proceeded, vows are exchanged, and the pair pronounced as husband and wife.

The poetic scenes are never empty and always have meaning. The vow, representing love, is weightless and its flight in the wind caught Robert’s attention and signaled her presence in the rooftop. Her recreation of a memory with her beloved but instead with Dennis does not end with a kiss because she knows that they are different. Her memory and reality are different. Andrea crying alone after the wedding tells that there is no one to blame for the continuation of the marriage since she could have chosen not to. This film shows that fate has his hands on everything, even the littlest things, which is not usually portrayed in mainstream romantic dramas.

If you want to torture yourself like I do with films with Hurt and Angst, this movie is for you. There are no grand proclamations of “I love you’s” but a lesson of moving on and settling as valid love stories. Lovi’s acting certainly upped the whole feel of the story for it to have such an effect. It is proof of her nomination as the Best Performance by an Actress in a Leading Role-Drama for Golden Screen Awards.

The next film is about a Bajau couple looking for a willing new partner to give a child and physical proof of Allah’s divine grace. Shaleha Sarail (Nora Aunor) is a midwife to many expecting mothers in the small water village in Sitangkai, Tawi-Tawi. Her occupation is an irony to her longing to have a child for she has delivered many babies but cannot have her own since she is now barren. With her selflessness and endless love for Bangas An, her husband and she braved the sea and found Mersila (Lovi Poe) who is willing to give him a child. Shaleha was overcome with gnawing jealousy with Mersila, the new partner of her long time husband.

Thy Womb is for those who want to know about the culture and traditions of the Bajau citizens in their water village in Sitangkai, Tawi-Tawi. It shows their community life, their joys and struggles, their colorful rituals and ceremonies, and their problems with pirates and the Philippines’ military police force. The drama film with many nominations and awards from film festivals all over the world will surely be a tear-jerker for its watchers.

Perhaps you don’t want any drama but prefer humor instead. Temptation Island is a comedy film about a group of beauty queen wannabes setting sail on a yacht to fight for the coveted title of “Miss Manila Sunshine”. The yacht they are in catches fire and they end up in a desert island without food, water and shelter. The beauty contest finalists with differing social backgrounds clash on the island, compete with one another with their dirty tactics and show different levels of their sexuality. Together with an attractive young man, a maid and the gay pageant director, the film shows that life on the island is anything but dull.

Temptation Island is a remake of the Joey Gosiengfiao movie with modern touches, turning the film to be homage to the original one instead. The 2011 version stars Heart Evangelista, Lovi Poe, Solenn Heussaff, and Marian Rivera as the beauty queen contestants.

Lovi’s role as the rich, over-confident and sharp-witted spoiled Serafina complements the other star’s acting so well she often steals the spotlight with her lines. She is perfect for the role of Serafina with her dialogue may have been already been delivered excellently in the original but with her haughty acting and standoffish demeanor.

Mayohan is about a teenaged city boy travelling to the town of Infanta in Quezon Province for a festival celebrating the miracles of the Virgin Mary. The film may be mainstream but it uses familiarity of the emotions for the viewers to anticipate the deceptive twists. Here, the innocent young man from the city ends up having a summer crush on the probinsyana Lilibeth, as played by Lovi Poe. The spiritual aspects of the tradition seem opaque as the unspoken sexuality and modern corruption.

Lilibeth won’t have the same depth if not for Lovi Poe. She needs to show the two sides to her character which are both virtue and sin. She wants love but she wants to be free from it. It’s not a surprise she won her first Best Actress award at the Cinemalaya Festival for her role in Mayohan.

The film offers a bit realistic love story. Mayohan speaks clearly of a flitting love made grand only by the depth of emotion at the present. Watch it if you want to see a film about young love.

The last film is for those who want soap operas, with violence and incest, in their movies. Sagrada Familia tells of a family falling apart because of an abusive father figure. The story starts with Merle leaving her daughter Kat (Lovi Poe) under the care of her domineering husband Johnny and consenting mother-in-law Carmen to work in Naples as a nurse. When Johnny knows of his daughter and her schoolmate’s relationship, he starts physically maltreating and sexually abusing Kat as an incest victim.

Sagrada Familia is on this list not because of the movie itself but for Lovi’s consistent acting. The film served as an acting vehicle although there are illogical loopholes and plot inconsistencies. One great aspect of the film is Lovi Poe’s role who always tries to keep up the façade of a happy family, keeping silent so as to preserve the family’s honor. She captures the hearts of the movie watchers as she sheds bucket after bucket of tears in the face of hardships and abuse at the hands of her own father.

Lovi Poe is a talented actress with her own strength and personalities. She certainly inherited her skills from her action star father and her beautiful mother. We look forward to you watching these interesting films and show appreciation to Lovi. Ingat poe!

Our movie partner Pinoy Movie Blog recently released a number of photo slogans inspired by the current campaign of the Department of Tourism called It’s More Fun in the Philippines.

Since Lovi Poe starred in a number of great films last year, here are some of the images PMB created featuring our talented star! Check it out!

Do you have more suggestions? Just email the webmaster of Pinoy Movie Blog and surely, he will post more images soon! 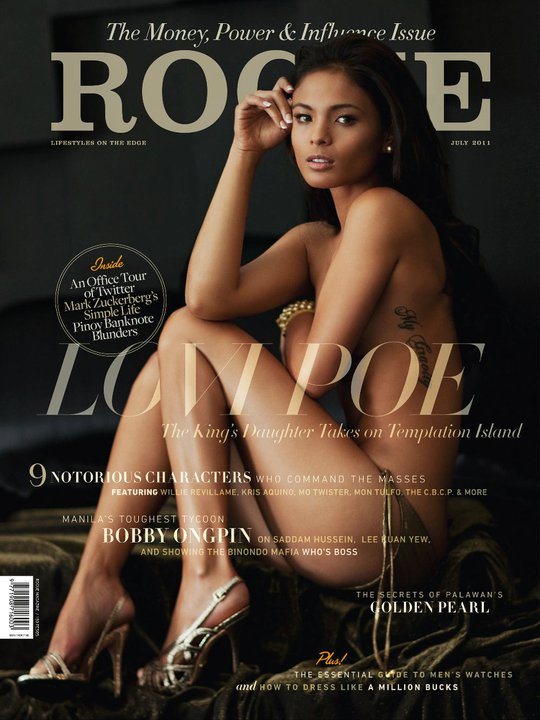 It seems like Lovi Poe fanatics have something to look forward to every month, huh? Lovi Poe is the cover girl of this month’s issue of Rogue Magazine with the tagline LOVI POE: The King’s Daughter Takes on Temptation Island. As expected, she is simply sexy on the cover!

We will post Lovi Poe’s photos from the said issue once we get a copy. Also, Temptation Island is set to be shown this Wednesday, July 6! 😀

Temptation Island Girls Marian Rivera, Heart Evangelista, Solenn Heussaff and Lovi Poe graces the cover of Preview Magazine for June 2011. This is in preparation for the promotion of the upcoming sexy-comedy movie.

The Kapuso stars wears Mark Jacobs creations and based on the video uploaded by StyleBible.PH, it seems like the girls are really comfortable with each other’s company.

To see more Behind The Scenes photos, you can go straight here.